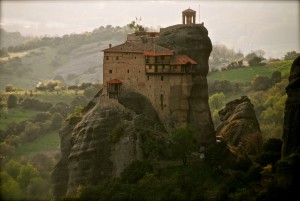 Grimston Abbey has been abandoned for centuries. Its former owners the Nuns of Avalone were summarily executed when the Island’s governor discovered their secret military operations attempting to undermine his rule. The governor of the time, Karl Rustavson was careful to make it clear to the people of the island that the nuns, though possibly celibate, were not a true religious order and were in fact godless Marxists. Representatives of The Holy Church confirmed they had no record of such a convent on the island.

Former stage actress turned freedom fighter, Gloria Foxenhold, now self proclaimed Abbess of Grimston Abbey, found herself the leading defendant in a trial, accused with her sisters of a catalogue of crimes that included sedition, treason and heresy. It is not known how the Abbess had managed to bring an explosive device into the courtroom. Secreted upon herself in parts unknown, superstitious guards may have been reluctant to so intimately search one of the Almighty’s many brides.

The Honourable Judge Esteban Cornandez was the target of the device which the Abbess flung with supernatural force, striking him on the face. It crumpled his Honourable and slight jaw into his neck before dropping into his lap and exploding. His Honour was blasted into particles no larger than the head of his gavel, particles that became indiscernible from those of the bailiff and the counsel for the defence.

His Honour had kept the bailiff close ever since his savaging at the hands of a unhinged stall owner, on trial for refusing to pay the governor’s extortionate levies. The counsel for the defence was at that moment privately presenting evidence to His Honour that would more likely have condemned his client than exonerated her.

After the executions not even the Governor’s militia dared enter the Abbey. They refused on the grounds that the Sisters had made it clear during their trials that the entire building was booby trapped. Any attempt to enter it would blow half the island into the sea.

Most islanders believed this to be an excuse and presumed the militia refused to enter the abbey for the same reason as the rest of them; that the Nuns had laid down a curse on the building and anyone who entered it. Not that anyone on the island wanted to enter the Abbey.

Though few if any would openly admit it most islanders had felt relief at the executions, having imagined the terrible wrath the Sisters of Grimstone may have wrought upon them for having condoned the Governor’s harsh rule for so long. And although over time the truth of the story became mixed with legend and the islanders came to outwardly criticize the executions even elevating the sisters to the status of folk heroes, there was not a single islander, even amongst some of the more rebellious adolescents, who thought it would be better if the island had spent the last centuries under the Abbey’s rule.