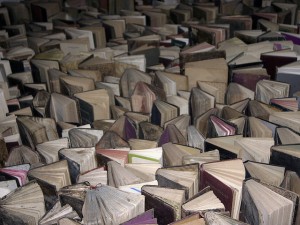 I don’t know who’s stupid idea it was to have a picnic in an old library. Probably Stephen’s. That kind of quirky shit appeals to him. He’s having the most fun by far. He keeps giggling at everything like a demented infant struggling to talk.

The floor is covered in a layer of dust twice as thick as the blanket they lay out on it. I try sitting down with them but dust rises up every time one of them moves about. That is mostly Stephen rolling, clutching his belly laughing hysterically at approximately nothing.

The slice of sponge cake Stacey passes me is deliciously moist. A perfect thin layer of icing with even a literal cherry on top. By the time it reaches my mouth the whole thing is covered in dust as if mould spores sprouted spontaneously all over it.

I choke on the dust as it forms a thick dry layer over the whole of my craw. Stephen only laughs all the harder. Stacey and Emma can’t contain a giggle either. I can hardly blame them. If I hadn’t been asphyxiating on a half vacuum full of dust I might have found it pretty funny myself.

After that I am good and ready to leave but Stephen thinks it would be funny to hide Emma and Stacey’s handbags on one of the book shelves. He runs around the whole library with a deranged grin, moving from shelf to shelf, tittering now and then. None of us have any idea what he is doing until we go to leave and the girls can’t find their bags.

Stephen breaks into shrieking hysterics and we figure out what he has done. The girls seem in no hurry to retrieve their bags and Stephen has utterly stupefied himself with his own brilliant joke so I’m left poking around a seemingly endless row of dusty and darkened bookshelves looking for a pair of handbags that don’t look dissimilar to a book.

I’d like to wring that swine’s little neck. It’s impossible to see anything here anyway. I’m sure I’ve looked at every single book on the shelf to check if it’s a handbag. I’ve probably double checked by now but is so dark I can’t be sure. There’s a small pocket torch at the blanket where Stephen’s still giggling and the girls have bemused looks on their faces for some reason.

I wonder why the girls find it in any way amusing as I pick up the torch. Searching the shelves I have to stare at the small yellow circle of light for several moments trying to gauge if it is a book or if it is actually a handbag and I just can’t make out the details properly. I move from book to book, squinting, hoping one will suddenly transmute into a handbag and we can leave.

My pacing back and forth along the row of books disturbs the centuries of dust. The cloud makes its way up to the height of my head. The air is heavier, dryer and ever more difficult to breath. At the corners of my mouth where there is small amount of moisture I feel the grey powder gather.

Instinctively I lick it away but that only adds to the smut already clagging up my mouth. Dry rasping and itching creeps down my oesophagus and the sound of my breathing becomes laboured and wheezy. Maybe now the girls will help me find the bags. Maybe Stephen’s gotten bored and will tell us where they are. maybe I can get the girls to make Stephen to tell us where they are. I go back to see.

Crouching to sit down next to them a fresh round of laughter bursts from Stephen’s direction. I look over to see his stupid face crease up into a smirk as two bags appear from behind his back. I blink, slowly, then turn and look at the two girls to see if they are laughing too.